You paid helluva lot for that wide-aperture lens, so you’re going to use it. What’s the point in shooting at an aperture that complements an image’s composition, its message, and your personal understanding of documented reality?

Oh, wait. You just paid helluva lot for that wide-aperture lens, hence you damn well see the world at f/1.4 or below, so that’s fine. Pinpointing what matters™, highlighting it in gloriously shallow depth-of-field. After all, there’s the Bokeh to consider, the creamier, the better. Unless you bought a cheapo lens and the out-of-focus areas are kinda hard, in that case that’s the statement you truly wanted to make. The harsh reality outside of what normal people perceive. The human condition, rendered in two inches of sharpness, the rest in uncomfortable blur. You even got an ND filter to make sure you won’t get tempted to stop it down in brighter conditions. Because the shallowness is what it’s all about.

For example, how could the following photo profit from a stopped-down lens? Juxtaposing the mercantile marketing world represented by the discarded Coke can to newspapers ready for disposal? As a somewhat ironic comment? Are you bloody kidding me? 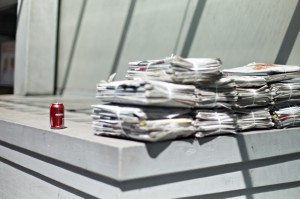 Na, the message is: the “% sodium” label sits in the same focus plane as the twine on the right. Because that’s what you can do with this fucking lens, that’s what it’s there for and what you’ve paid for. It’s huge, it’s heavy, it’s expensive. It’s irritating the manufacturer still bothers with aperture blades! Such lenses are made to be shot wide open, so you’ll do your damnedest to only use it wide open. Always. No exception. The Bokeh will make it a good image by default. No?