So here I am, ordering stuff for less than $50. And suddenly, for the first time in 7 years, PayPal asks me to accept a full check-up of any financial information logged with the SCHUFA / debitors’ list. 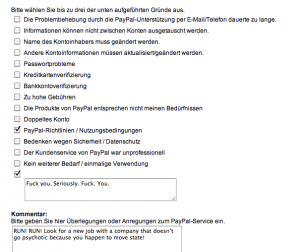 Thanks a bunch, Adobe. You had heard the cries of pain, mostly from Windows users, thus Reader 8.x: Much faster! And later, Reader 9.x: Even faster!

But where did those speed improvements come from? Apparently mostly from trial-and-error rendering of Postscript-flavoured (OpenType) fonts. Ironic, sort of, considering you guys pushed Postscript to begin with. But TTF-flavoured fonts still display just fine.

But hey, it’s not a biggie, is it? Just use web fonts or the € 600 Acrobat Pro package to generate PDF documents. Thus, all obscure hinting information necessary for proper font rendering will be included. Never mind documents generated with other PDF writers showed up perfectly in Reader 6 and 7, and still do so with alternatives such as Foxit or Apple’s Preview. Who cares about alternatives anyway?

You’re smarter than this … You are perfectly aware of the fact that 99 % of end-users read PDF documents with your software. Hence people producing loads of for-screen PDFs require both your software and 600 bloody Euros to make sure customers won’t throw up over their keyboards when opening invoices or letters. At least them invoices and letters that include serif Postscript fonts.

I am deeply humbled by this display of sheer ingenuity. PDF is a rather open format? Well, let’s make sure only documents generated with our stuff displays fine with our stuff. Microsoft should avert their eyes, blinded by your glorious rip-off dedication to deliver integrated solutions.