The Swiss Parliament decided it needs to be easier to kill wolves. Prime amongst the suggestions being “well, if the shepherd sees one, he should be allowed to shoot it down.” The motion went through the Nationalrat just as easily as through the Ständerat, with 92 to 79 votes by 10 abstentions.

I’m not Green, before you ask. I’m a Liberal, and member of the Swiss Pirate Party. I’m a pragmatist in most things, idealist in others. But I simply can’t stop laughing at the arguments put forth by them wolf haters both in parliament and the media:

It’s something we still can influence, they say. Lots of sheep die due to lightning and other shitty natural stuff – but the wolf? That we can control, they argue. Wolves aren’t indigenous to Switzerland, they claim, so it’s okay to get rid of ’em buggers at slightest emergence of a stable canis lupus population.

Now, after playing too much The Path I am conditioned to agree with putting down wolves of all kinds. Then I remember that we’re talking about a nigh-extinct race here. One that got nigh-extinct by upright Swiss citizens shooting stuff from the late middle ages onwards, resulting in craploads of horror stories about wolves stealing kids, both human and goat. As they had to enter villages and stuff to survive be evil during a hard winter’s time as abovementioned upright Swiss citizens “harvested” most game in the woods. For, again, the abovementioned hardcore winter.

The Valais is somewhat of an inside joke in Switzerland already. While we Swiss have dealt with about four of them buggers in a decade, wolves are abundant in northern Italy. How do they deal with these bloodthirsty monsters? Sheep dogs. You know. Just as sensible people have done for centuries. Now we have them harking the potential losses if more wolves enter Switzerland, while at the same time admitting they lose about 10 000 sheep each year due to negligence and, well, bad weather.

10k dead sheep. You’ll need shitloads of wolves to even appear in Dead Sheep Statistics™, in relation. Wolves in our hemisphere are the descendants of them anxious, paranoid bastards that did not go near Valais citizens to get killed.

Sometimes, I wonder who the real Wolf is.

When I first stumbled over the playground in The Path, I went all “what an outlandishly bizarre idea.” Well, the idea might still be bizarre, but, well, look for yourself: 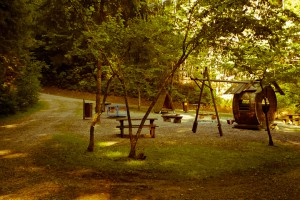 Right in the middle of them bloody woods. Woah. Switzerland is weird.